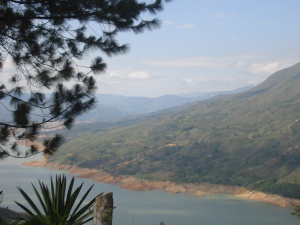 Today’s headlines are focused on Colombia. Stories regarding the U.S. Secret Service’s prostitution scandal in Cartagena during last month’s Summit of the Americas have brought the South American country to the forefront of international news.

But the scandal you’re not hearing about revolves around La Toma, a small Afro-Colombian community in Cauca, a gold-rich, mountainous region in Colombia’s Pacific southwest. With the price of gold soaring, foreign mining companies are swooping in and forcing out the Afro-Colombian community that has inhabited La Toma for centuries and used small-scale mining for sustenance.

In the face of paramilitary groups, death threats, assassinations and forcible displacement, the people of La Toma are fighting for their land and livelihood in an unprecedented legal battle that’s gone all the way to Colombia’s Constitutional Court. And it’s women such as Clemencia Carabali and Francia Márquez, who have garnered international attention protecting their ancestral lands despite death threats (even being featured in a PBS Special Series titled, “Women, War and Peace” Part 1 “The War We are Living”).

“Traditionally it’s been men that have been the leaders, but in the past five years so many Afro-Colombian leaders have been killed or otherwise exiled that it’s the women  — who usually were in the background – who’ve stepped up,” says Gimena Sánchez–Garzoli, leading Colombia human rights advocate at the Washington Office on Latin America (WOLA). She adds, “That’s why Francia and Clemencia are so important. In a sense, this generation of women have taken over what the men are doing so they can promise their children some kind of economic sustainability and life in their lands for the future.”

For generations, this land has belonged to the African descendants who were brought to Colombia during the slave trade as early as the 16th Century. These Afro-Colombians have practiced traditional small-scale artisanal mining since 1636. But with growing foreign and Colombian interests in mining, they’re taking a hit.

“[La Toma’s people and Community Council leaders] are the ones designated to manage the land. Instead, what the Colombian government has done is ignore the fact that they live there, ignored their efforts to title the land so that they could entitle it to third parties with foreign interest,” says Sánchez. 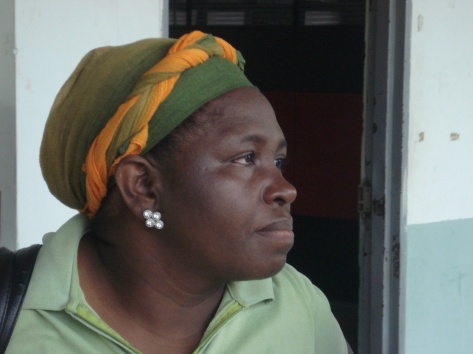 That means that foreign and Colombian companies and even illegal groups with paramilitary ties began mining in La Toma without consent from the people. And when the Afro-Colombians tried to protest, gold-mining impresario HéctorSarria and others petitioned to have the people removed. Essentially, the Colombian government began displacing the Afro-Colombian people so that private and international companies could mine for gold.

“The idea is to take over a lot of the natural resources located mostly in lands that are guarded by Afro-Colombians and indigenous people to make Colombia more sellable to the world. But most benefits of this type of activity would not go to the people actually living there, who are living in abject poverty, but to outsiders and national companies that would basically be encroaching on their lands,” says Sánchez.

So with illegal miners infringing upon their territory and the government literally evicting them from their own land, the people of La Toma took a legal route in 2009, demanding a say in what new mining interests – if any – are allowed and to stop the multinational and paramilitary-backed companies that began mining without consent from the Afro-Colombian inhabitants.

“Colombia’s Constitutional Court made a decision related to the right of La Toma’s residents to be consulted before mining development happened on their land and it’s really an unprecedented kind of decision,” says Nadja Drost, a correspondent for The Global Post who has spent considerable time covering La Toma and other Colombian mining communities engaged in similar disputes. She goes on to add, “What’s happening in La Toma is really indicative of a lot of traditional mining communities in Colombia, but what’s unique and different about their situation is the extent and steadfastness of their resistance to outside mining, the fact that they took this legal route and that a decision was made, that for now, appears to be in their favor.”

The ruling made in December 2010 demands mining titles around La Toma be suspended until a consultation takes place. “That could be a real bellwether for other communities in Colombia who face the same situation,” says Drost. But there’s still a problem. The violence hasn’t stopped. And neither has the mining. “The court decision itself was precedent setting, was very remarkable and gave the community a lot of hope. But since that decision has been issued absolutely nothing has changed,” says Drost.

While the people of La Toma wait for the provisions from the Constitutional Court to finally take effect, the gravity of their efforts – especially being African descendants in Colombia — cannot be understated. It wasn’t until 1991 that the Colombian Constitution even acknowledged the existence of Afro-Colombians.

“In other words, officially, Afro-descendants and indigenous people didn’t really exist in the panorama of the country,” says Sánchez. “The way that Afro-descendants have traditionally been treated in Colombia, they’re seen as people who live in certain areas, but they don’t matter.”

As Drost points out, “We can’t ignore the fact that Afro-Colombian communities have been amongst the most marginalized in Colombia; they suffer a disproportionate brunt of the conflict. They have the highest rates of internal displacement. Many of their leaders are targeted by death threats or killed. And they’re amongst the poorest of Colombians.”

All this begs the question of whether or not La Toma is being targeted strictly because the people there are Afro-Colombian.

“Mining companies go where the minerals are,” says Drost. “So they’re not specifically targeting [the Afro-Colombians], I don’t think. But it just so happens a lot of it overlaps with Afro and indigenous communities.”

For the people of La Toma mining is more than money; it’s a way of life. Men and women, adults and children all work together. There is no discrimination in jobs based on gender. The kids learn early and mine on weekends to help their families. They do excruciating work: digging in tunnels, chipping away at rock walls, hauling sacks of rock on their backs, breaking rock into small pebbles with metal poles and sifting through their finds with wooden bowls and water.

“They have a local market every Sunday and that’s where gold buyers come to town and you can sell whatever you mined in the week, whether it’s a few flecks or grams of gold,” says Drost. “It’s almost like this old – it’s not a bartering system – but it’s really amazing to see these flecks of gold pass from the miners hands to the gold buyers hands.”

They don’t buy anything fancy with the pesos they get in exchange for their hard labor. They use the money for potatoes. Sometimes it’s onions. They do it every Sunday. They’ve been doing things this way for centuries. Passing hands from one generation to the next. And now that’s in jeopardy.

Next week, we will bring you “Clemencia Carabali and Francia Márquez: In Their Words”