Imagine being just 17 years old when your mother dies. Your entire life transformed in 24 hours.

Before her death, she’d been raising you and your two siblings alone. You take her to a hospital to be treated. And the doctor denies her care, not because her condition was incurable but because you are unable to pay the cost of her treatment.

That’s exactly what happened to Alejandro Fernández Gutiérrez. At the hospital, before his mother could receive care, he was asked for $100 (approximately 700 Bolivianos). Unfortunately, he did not have the money to save his mother’s life. Nor did Alejandro’s family have health insurance which was unavailable to Afro-Bolivians. At this time in Bolivia’s history, Afro-Bolivians were not recognized in the country’s constitution.

We needed help from the system, but the system wouldn’t respond to us,” says Alejandro. 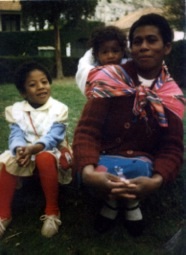 So his mother, Elena, described as a kind and peaceful woman, who had been cleaning houses since she was nine years old died that fateful day.

Since then, Alejandro has earned recognition from the United States Department of State and The Bureau of Education and Cultural Affairs. He’s published works on HIV/AIDS prevention and graduated from the University of San Andres (Bolivia) with a degree in Social Sciences. At 26 years of age, nearly a decade after his mother’s death, Alejandro is a prominent voice advocating for Afro-Bolivians and a human rights activist.

Although his mother’s death inspired him with a new outlook, changes didn’t happen overnight. Alejandro was hesitant to join the Afro-Bolivian movement, along with his uncle.
I remember mentioning that I couldn’t join because I wasn’t Afro. I told him, ‘I’m not black enough to be in the group,’” says Alejandro, who saw himself as a mix of races because his father is Aymara Indian (one of Bolivia’s indigenous ethnic groups) “For me, to be black in a country where discrimination happens because of your color…I didn’t want to be a target.”

However, Alejandro was becoming increasingly interested in his mother’s culture – a culture she never knew.

He started by participating in workshops and festivals. He was 18 when he was featured on a Bolivian reality TV show. On the program, he was asked to dance, “Something like Saya, but stylized like Caporales, Tundiqui, Negritos or Sambos,” says Alejandro. “I said, ‘No, I will dance Saya even if it’s not commercial enough.’” (Saya is a folkloric dance and musical tradition performed by Afro-Bolivians. It fuses African percussions with Andean instruments.)

When the program was over many people associated me with Saya and the voice of Afro Bolivians because I mentioned cities of The Yungas,” says Alejandro. (The Afro-Bolivian population is concentrated in a region called Los Yungas, 55 miles north of Bolivia’s capital, La Paz.)

While gaining recognition as an advocate for Afro-Bolivians, Alejandro began university studies. He was the only Afro-Bolivian in his class. The only other Afro-Bolivian, at the college, was a female professor. 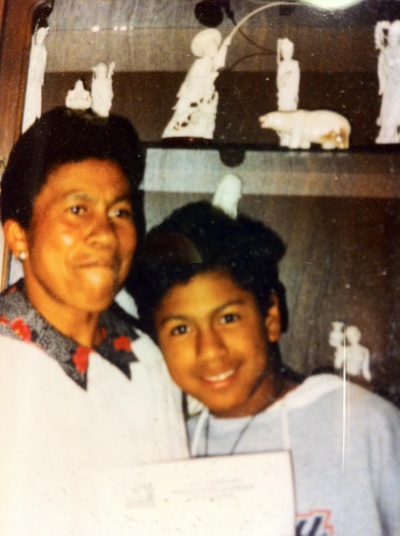 She told me, ‘You are getting better education, you can lead the movement and be a model for your generation,’” Alejandro says of Professor Monica Rey. “Those words really touched me.”

Alejandro attended meetings and protests with the faculty. With Professor Rey, Alejandro was invited to meetings with The United Nations, Human Rights Commission and Bolivia’s Parliament.

I realized that those people did not have any idea of the needs we [Afro-Bolivians] had and they did not even know how many Afros there were in the whole country,” says Alejandro. “They needed to know and understand our needs. I had personal experiences and they could learn from that.”

He felt compelled to share the lack of treatment his mother was provided at the hospital as well as the discrimination she experienced in her daily life.

Alejandro describes his mother, Elena, as dark-skinned with short coarse, coily hair. She was so tall and her hair was so short that people on the street would sometimes call her a “señor.” They would also call her “El otro, (The other)” because they hadn’t seen a black person before. Alejandro’s mother suffered daily humiliation, even falling victim to the local discriminatory act of pinching.

When people see a black person, they pinch themselves because they believe it brings good luck, “ says Alejandro. The act stems from slavery. Indigenous people pinch themselves as a reminder that when Africans were brought to Bolivia as slaves, their presence alleviated some of the discrimination and hard labor that had been previously performed by the indigenous population.

That’s probably why we didn’t go out too often,” says Alejandro. Even going to a hotel or restaurant was a struggle. “They didn’t believe that a black woman or indigenous people could have money to pay for their meal in a restaurant.”

But this was the culture in Bolivia. When Alejandro was growing up, Bolivian children weren’t even taught about slavery in schools. It was almost as if Africans just showed up one day. The connotation was that being Afro meant being a slave, being “el otro.” The country had created an atmosphere in which Afro-Bolivians and indigenous people were not only inferior, but also invisible. They had no rights, no insurance and little access to education.

I knew what had happened to me wasn’t the only [incident]. I had friends who were Aymara and the same thing happened. Their mothers died because they didn’t have insurance,” says Alejandro who also knew stories of young boys and girls who died of Hepatitis B without access to a hospital because they did not have money for treatment. “What happened wasn’t an isolated case.”

Fueled by these struggles, Alejandro has worked to better the lives of Afro-Bolivians and Bolivia’s indigenous populations. He worked with The Bolivian Foundation for Multiparty Democracy, The United Nations Population Fund (UNFPA) whose mission is to promote the right of every individual to health and equal opportunity, and other organizations. He has also written articles and has become an advocate for HIV/AIDS prevention and education.

Alejandro is currently a graduate student and Fulbright Scholar at Arcadia University, Glenside, Pennsylvania. He is studying International Peace and Conflict Resolution. And when he’s not studying, Alejandro writes regularly for the “We of the Saya” blog with friend and filmmaker Sisa Bueno. (see Sisa’s Story)

In the ten years since his mother’s passing, Afro-Bolivians have helped to craft a new Bolivian Constitution, which includes the most basic of human needs – recognition. Alejandro agrees that Bolivia’s President Evo Morales has worked to change perceptions about Aymara Indians and Afro-Bolivians, particularly in the field of education. However, Alejandro notes that President Morales still has work to do in many fields to help improve the lives of both groups, including access to health care. And while there’s still a lot of work to be done, the benefit of having Alejandro as an advocate for the community cannot be overstated.

After graduation, Alejandro is weighing the possibility of working at UNFPA or the United Nations. Or, maybe even Bolivia’s Department of Justice. While he’s not certain where he’ll work next, Alejandro knows one thing for sure, “This world needs leaders and I am one of them.”

So, you want to make a documentary film. Should be pretty easy, right? Just grab your camera, shoot, edit and you’re done. Not so fast. The multi-layered processes associated with making a film tends to be a bit more complicated and peppered with lots of starts and stops, especially financing issues. Plus everything else imaginable and some things you just can’t imagine.

In the world of filmmaking, taking on the untold story, the unimaginable and the unthinkable are often what makes film projects so incredibly appealing. Capturing history — whether its life’s smallest moments or biggest events– is often the attraction.

New Yorker Sisa Bueno, an adventurous Latina of African descent and a self-described political junkie, is learning first hand about the starts and stops of filmmaking. As a graduate of the prestigious New York University Film School, Sisa admits, “I had the naïve thought that documentaries were much easier than traditional fiction films, which is completely untrue.” END_OF_DOCUMENT_TOKEN_TO_BE_REPLACED

Today’s headlines are focused on Colombia. Stories regarding the U.S. Secret Service’s prostitution scandal in Cartagena during last month’s Summit of the Americas have brought the South American country to the forefront of international news.

But the scandal you’re not hearing about revolves around La Toma, a small Afro-Colombian community in Cauca, a gold-rich, mountainous region in Colombia’s Pacific southwest. With the price of gold soaring, foreign mining companies are swooping in and forcing out the Afro-Colombian community that has inhabited La Toma for centuries and used small-scale mining for sustenance. END_OF_DOCUMENT_TOKEN_TO_BE_REPLACED