Singer Alex Cuba’s life without limits, and the father who inspired it (Part I)

During a recent telephone conversation with my dad, he asked me, “What style music does Alex Cuba play?” I was stumped and had a really difficult time defining the sound. I stumbled around trying to answer the question, but really had no answer. Finally, he said, “That’s ok, I’ll look him up.”

Fast forward a few weeks and I’ve learned that Alex Cuba really doesn’t want to be defined by one particular sound or genre. So, when I asked him last week during our interview, “Who is Alex Cuba?” His answer made perfect sense, “Alex Cuba is the inventor but that’s a really big word, but I want to say that Alex Cuba is a genre bending artist who is really hard to pinpoint and box.”

As a singer/songwriter from Cuba, it’s hard to imagine Alex Cuba as anything other than an Afro-Cuban jazz or salsa singer due to the island’s rich musical history. But he’s not. He actually credits his style, which is a concoction of a variety of musical genres (rock, salsa, Latin pop, samba etc), in great extent to his father, Valentin Puentes, and his diverse musical interests and desire for his son to live completely free of limitations.

Cuba says his father has classic taste in music, loved old school Trova music and Cuban standout performers like pianist Compay Segundo, Conjunto Matamoros and the incomparable Beny Moré. Contrast these Cuban musical powerhouses with Puentes’ enjoyment of singing the Beatles in Spanish, listening to Elvis Presley and a year spent teaching music in Angola and it’s easy to understand how Alex Cuba would be so inspired to move freely between musical styles, feeling very at home and comfortable being quite unconventional. 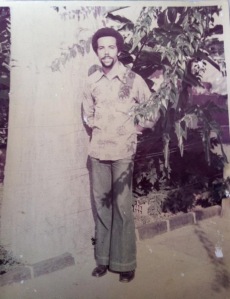 Although Cuba, a 2010 Latin Grammy Winner, seems like he is hitting all the right notes musically, he candidly acknowledges that he was very shy as a child in Cuba. However, he credits much of his success to his father’s messages to him and his twin brother, Adonis, to “believe in yourself.” Cuba says his father helped him to live from a place where he is “… free in his mind and completely free of racism, never feeling limitations.”

In continued conversation with Cuba, you realize how incredibly deep his admiration is for his father, Valentin Puentes. As a child, Alex remembers his father spent 1979 -1980 in Angola teaching music. Puentes’ year in Africa was incredible, and had a strong impact on him personally and professionally. Artistically, Cuba’s father developed a repertoire of Angolan music and learned Portuguese. Physically, Puentes transformed; “he let his hair grow and had beautiful sideburns.” Referring to Cuba’s own coif, he says, “The way I look comes from the influence of my dad living in Angola, looking incredibly sharp and handsome.” (Not from Jimmy Hendrix or Lenny Kravitz as commonly believed) Cuba remembers his father returned from Angola with greater pride and confidence in himself.

Nearly two decades after his father’s sojourn in Angola, it was the son’s turn to leave Cuba. At the age of 24, he immigrated to Canada to “creatively spread his wings.” He left his island homeland on good terms and is at peace about his move. “It’s great to know you took the right steps in life, no regrets and no looking back.”

When Cuba won the Latin Grammy in 2010, he says his parents went crazy. It was an amazing moment for his father. After winning the award, Cuba felt validated in his decision to move between musical styles. The honor deepened his confidence to take creative risks, like incorporating reggae and changing the tone of his voice with his new CD, Ruido en el Sistema (Static in the System). And Cuba’s sound continues to be undefinable, “It’s even harder now to categorize my music.” Lovingly, he praises his father for raising him with a completely limitless view of his possibilities and his world.

I guess fathers do know best.

Continue the conversation with Alex Cuba and join our live twitter chat with him on Monday, October 22 at 8 p.m. EST.