The London Olympics ended a little over a week ago. And now that the torch has been extinguished, the athletes have returned home and venues are being repurposed, all eyes are on Brazil as Rio de Janeiro prepares to host the 2016 Summer Olympics.

Undoubtedly, Rio is stunning. Considered one of the world’s great playgrounds, it’s an incomparable city. Rio often seems postcard perfect – bathed in bright sunshine, blue skies and tropical rainforests. It’s home to the pulsating rhythms of samba and “beautiful people,” enjoying the beaches of Ipanema and Copacabana. However, there is another side to Rio that’s less glamorous and often tragic – its favelas – the slums perched high above the city, often occupying prime Rio real estate. Favelas have become synonymous with violence; random, unpredictable and yet expected. Case in point, 23 year old Afro-Brazilian Roberto Custódio. Roberto grew up in Complexo do Maré one of the most dangerous favelas in Rio. When he was 13, he witnessed his father’s death by one of the favela gangs. The tragic death left him devastated. 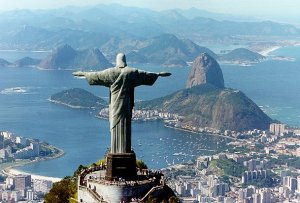 Prior to his father’s passing, Roberto had just started boxing at Fight for Peace (Luta pela Paz in Portuguese) a not-for- profit organization founded by Londoner Luke Dowdney. Fight for Peace teaches boxing and life skills to children from Brazil’s favelas. Roberto says his father’s death left him unmotivated and with little interest in boxing. At this point in his life, Roberto’s story could have continued on a downward spiral as his thoughts were fixated on violence and avenging his father’s death.

However, like so many events in life, there’s often a silver lining hidden by the tragedy, despair and hopelessness. Gradually, Roberto realized that his thoughts were destructive and began changing his focus spending more and more time at the Fight for Peace Academy. In a discussion with Laureus, a foundation providing financial supporter for Fight for Peace, Roberto credits the organization with changing his life, “I am eternally grateful to all this support and also to Luke Dowdney, who has chosen the community where I live to develop this beautiful work that has changed my life through the Academy.”

Fast forward a decade and Roberto’s life is a true example of the power of the human spirit to overcome tremendous odds. Roberto is a young man who has carved out a new life for himself and his young family. He is currently training and aspires to be on Brazil’s 2016 National Boxing Team, fighting for his country when it hosts the Olympics in four years.

Recently, we spoke with Luke Dowdney, founder of Fight for Peace, the organization  Roberto credits with changing his life.

As a child, Luke loved to box. Years later, he won the British University Boxing Championship as a light middleweight and also spent time in Japan as a boxer.

During our interview, he spoke about Fight for Peace’s mission and how it changes lives.

Los Afro-Latinos: How did you become interested in children living in favelas? Where did the idea to create Luta De Paz (Fight for Peace) come from?

It was interesting to me (1990s) – I was only 19, 20 years old at the time. It just amazed me that there were these little heroes, little warriors, living on the street and they were only, seven, eight, nine, maybe 10 years old. Think about it, on one side, it’s a terrible human tragedy. And on the other side, these kids are heroes. Yes, we have to get them off the street and not forget the struggle that they have to go through every single day…I couldn’t imagine being that young and that strong. I wanted to meet these kids; I was fascinated. They were strong, amazing people and victims, at the same time. It’s sort of a paradox.

I came to Brazil with the idea of yeah I’m interested in them. So, I became a volunteer for Viva Rio, a large social service agency.

LA-L: Why did you start boxing?

LD: In London, I went to a government school and then I won a scholarship to an elite private school. I wasn’t accepted there. I got bullied quite a lot. I couldn’t fight these guys because they were bigger than me. It was like the Japanese proverb, “The nail that sticks out will always get beat down.” I couldn’t take it (bullying) anymore. It left me with a lot of anger and a lot of rage.

So, I went back to the government school, and then I started boxing. Boxing disciplines you. It builds your self-confidence. It really makes you get in touch with the idea of discipline. Boxing taught me that discipline and hard work and certain things you take out of the ring and into the rest of your life. You only win if you train and train hard. And that’s life, you know? You don’t get anything in life if you don’t work hard. Well, some people are lucky that they get every bloody thing, but generally, you have to put in to get out. I got started with the kids because one of the street kids saw me box and wanted me to show him a few moves. Before I knew it, there were five kids lined up. That’s how Luta de Paz was born.

LD: Favelas have a reputation of being feeding grounds for crime and violence. Many of the kids are armed and sniff glue; they suck it down from bottles. That’s how they get high. The glue puts holes in their teeth. We couldn’t get glue bottles from the kids, no matter what we did. Offering them pencils, papers, games, no matter what, they wouldn’t leave it alone. Just like we couldn’t get the glue bottles off the kids, we couldn’t start a dialogue about drug trafficking and carrying machine guns. Boxing is a very amazing way to start a dialogue with difficult kids. They’ve got a lot of energy; they’re in a gang, whatever. They don’t want to go to school. They don’t want to be in a social program. But if you open a boxing club, they’ll come looking for you.

LA-L: So what happened next?

LD: I finished my degree and then I went to Tokyo, (Japan) where I boxed for about 10 months. I stopped because I had a head injury.

It was very important for me, as a gringo, to learn and to listen. It’s not my culture, it’s not my place. I was in the favelas volunteering and these kids were walking around with machine guns. And I just couldn’t believe it.

I thought I could start a small boxing club which was inherently a social program. Its’ name is an oxymoron, Luta de Paz, “Fight for Peace.”

The beauty in the beginning was it was my instinctive response to the situation and it was a way of dealing with the question of how to effectively contact and dialogue with young people who were involved in high levels of violence. In the first year that I was in the complex (group of favelas), there was something like 43 gun deaths in one month. What ended up happening was the development of what’s called the five pillars:
(1) boxing and martial arts, (2) education, (3) employability (4) youth support services and (5) youth leadership. We have over 400 young people taking primary and technical education courses. Some of these kids are 25 years old.

LA-L: How did you decide on five pillars?

LD: There’s not one answer. We need a structure and the kids can choose which stuff they need and get support where they need it. A lot of kids come and don’t do employability. Others come and don’t do education. Some kids do all five pillars. We have kids who study in our classrooms, five hours a day; some kids have a personal mentor; we also have a lawyer and a psychologist working with us. We say, what you’re doing is important, and the way you deliver the values and principles of Luta de Paz is important.

So we’ve learned a lot over 12 years. We’ve had more than 7000 young people go through the program. We started an academy.

Roberto normally trains in São Paolo with Brazil’s National Boxing Team. During a recent visit to the Fight for Peace Academy in Rio, he sent us these “Day in the Life” photos.

7:30am: Breakfast includes bread, coffee, milk and lots of fruits

I’m putting on trainers and hand-wraps

11:30am: Making most of gap between training sessions, I spend time with my daughter

I also catch up with my uncle during break

Soaking up sun with my daughter

11:30pm: I get my uniform ready for next day’s training. Bedtime!