Several months ago, I announced that Los-Afrolatinos would “expand the tent” and cover not just Afro-Latinos but the larger African Diaspora as often as possible. Our current post focuses on Haiti; a country that captivates me. I’m inspired by its past, the first black republic in modern history, the resiliency, creativity and ingenuity of its people and its profound culture. With this post, I wanted to bring you another perspective of the island nation, beyond the doom and gloom so often reported. But rather, a look at how Haitians, despite seemingly endless challenges make room to create, celebrate and honor. I’m consistently inspired by how much Haitians accomplish despite a history which has been less than favorable. We can all gain strength by their sheer determination to persevere.

Jacmel’s 2014 Carnaval was covered for Los-Afrolatinos by freelance reporter, Amy Bracken. You can hear Amy’s work on Public Radio International, “The World,”  one of my favorite radio programs because of its’ in depth coverage of global issues, particularly those relating to Africa and Latin America.

Although we are publishing this post in May, Amy was in Jacmel in March for the town’s carnaval festivities. While this post is a bit behind schedule, I believe it’s right on time. 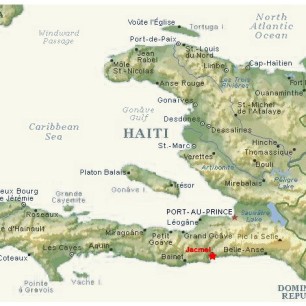 When a 7.0 earthquake struck Haiti in 2010, it devastated much of the country, including Port-au-Prince, the nation’s political capital, and Jacmel, known by many as the nation’s cultural capital.

Then, in the wake of the disaster, Jacmel’s Carnaval was cancelled.

Of course, this was a natural response… Who would throw a party after such tragedy? But the cancellation was an added blow to the city’s economy and spirit.

Jacmel, founded in 1698, has the most creative and yet traditional Carnaval in Haiti – full of colorful papier maché masks and marionettes, bands à pieds, and street theatre depictions of politics, religion and pop culture. The event both springs from and gives rise to the city’s vibrant arts and crafts.

You can’t separate Jacmel from Carnaval. “The papier maché, the masquerade, it’s in our blood,” says Jacques Turin. He heads an association of papier maché artisans, in Jacmel, and he was among some 100 artists to represent Haiti at the Smithsonian Folklife Festival in Washington, DC, in 2004.

Today, on the eve of Jacmel’s Carnaval 2014, Turin stands under a looming papier maché monster – one of his creations, is in the space between two buildings that functions as his workshop. 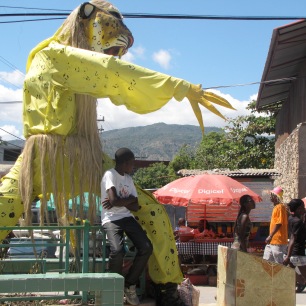 The association has scores of members, but paper maché making is something of a family operation. Turin and his wife, who introduced herself as Madame Jacques Turin, both started working in this medium in their teens, about 15 years ago. For this year’s parade, she’s created several zebras and guinea fowl. “If you want to finish on time, you have to start in October,” Madame Turin said. “It’s all hard work because you have to look for the cardboard, then wet it and dry it in the sun, and then make the mould…” And this evening, throughout Jacmel, artisans are putting the finishing touches on their pieces, painting them brilliant colors, giving them a shiny gloss, and trying on masks and butterfly wings.

Trying on wings before the festival

Madame Turin and one of her zebra heads

The Turins’ 12-year-old son James will be a butterfly this year; he proudly calls himself a papier maché artisan. Up the street, Vady Confident has climbed into the attic above his dad’s home. It’s a cramped workshop, crowded with men finishing up a monstrous sized spider and a giant Mother Haiti – who stands wrapped in blue and red satin with doves for hands. Spilling out onto the roof are dozens of oversized heads of famous people, including President Barack Obama and a dead-on Pope Francis. 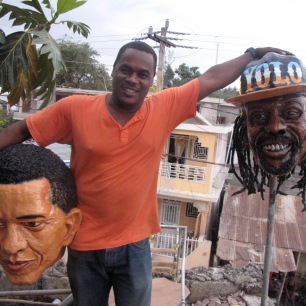 Vady has been working with papier maché since he was eight years old. “My father used to get mad at me because instead of studying, I was in the mud making masks and such. But now he’s satisfied,” Vady said with a laugh. He earns a living as a painter, sculptor and papier maché artist. And what he and other artisans create exceeds the demands of Jacmel’s Carnaval. Some of the masks and marionettes in Vady’s workshop will be paraded through the streets of Jacmel. The rest will go to other Haitian towns for their Carnavals or to collectors overseas. The creative output of Jacmel is pushing at the seems of this city of 40,000 inhabitants, with crumbling buildings and limited infrastructure. The number of groupes masquées – or paraders of papier maché puppets and costumes – allowed to take part in the parade is capped this year at 120, jazz bands at 4, and dance troops at 4. Parading will take everyone five hours to wind their way through the narrow streets, and then the more modern and raucous nighttime procession will begin. “Carnaval,” Confident said, “is a socio-cultural product. Through art, you can parade yourself, put yourself out there. 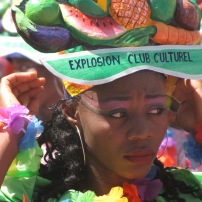 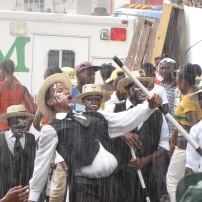 As a Haitian, it’s a way to come alive again. It’s a way of taking all your problems and setting them aside, and having fun.” Economic hardship is ever-present here, as anywhere in Haiti. On the eve of Carnaval, many participants express frustration that they still have not received promised payments from City Hall – support they rely on to pay back loans used to buy materials each year. But the show always goes on. Still on Rue Isaac Pardo, Gerald Petit-Frère said being a papier maché artisan is always a strain economically, but he has no choice. “I’m obliged,” he said. “It’s the thing I learned to do.” He spends all year making and selling papier maché and other crafts – artisanal placemats and trays – to support his family. And he’s teaching his children to do the same. Across the street, in the back of a house, is a devil’s workshop. A group of boys and men are finishing their preparations.

They’re part of the Societé Makaya, headed by Jean Jeudy. “In the name of art and culture,” Jeudy said, “we’re bringing back a tradition lost for several years in Jacmel. It’s a Mardi Gras figure, dressed all in black, with a mask that we’re making of goatskin. He’s lanceur de corde, but they call him the devil.” This figure will emerge late in the day during Carnaval, move around town, and find ways to scare people. The devil lurks in various forms throughout Carnaval, amidst the bright cheerful giraffes, flamingos, and other animals… He takes the form of a ghoulish papier maché mask, or boys and men painted black and carrying chains, tomatoes in their mouths for an eerie effect.Then there are the renditions of dark periods of Haiti’s history – slavery depicted by papier maché bodies, barefooted, ragged and chained, with bloody, severed limbs. There’s the depiction of war, with a tank and menacing soldiers carrying signs that read, ‘Down with Violence.’ 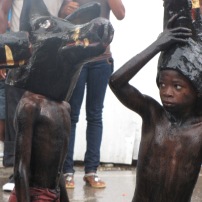 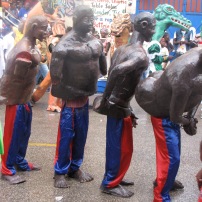 Even with all the darkness and light of the parade, one thing is clear: The earthquake and prolonged aftermath did not take out Jacmel’s Carnaval and culture. In fact, there’s reason for optimism. After the big day, Jacmel Mayor Adonis Noe told Los – Afrolatinos that more people came to Jacmel to see Carnaval this year than in the past (local tourism office reported all 695 of the city’s hotel rooms were reserved). Meanwhile, more hotels are being built and others are expanding, and a new hotelier school has opened in the city. A new boardwalk has been built along Jacmel’s waterfront, with a promenade, greenery, and colorful mosaic murals that shimmer under lamplight. In front of the boardwalk, the old gray sand beach remains, with wooden fishing boats and piles of netting. And behind it, a theatre is being built. The city’s domestic airport has hit hard times, but the mayor has asked the federal government to consider renovating it and expanding it to allow international flights. He hasn’t gotten a ‘yes’ yet, but he’s happy to hear that it’s being considered. Noe says there’s no reason not to bring more tourists to his city. “Jacmel is the cultural capital of Haiti,” he said. “We have a natural and original Carnaval – the product of our artisans and our culture. You can’t change Jacmel’s culture.” 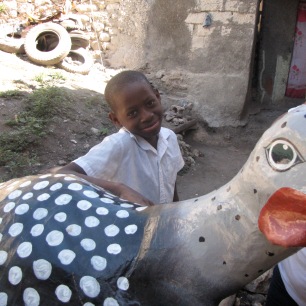 Next generation of Jacmel artisans 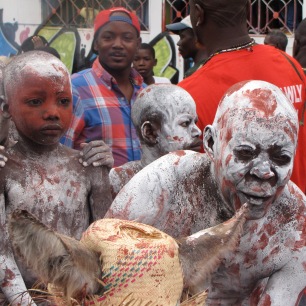