Kim Haas sat down with Cuban musician Alejandro Mayor to talk about Cuban music, the African connection and his new CD “La Fusión”

I had the good fortune of meeting Alejandro Mayor, an accomplished Afro-Cuban musician, and his lovely wife Dania in Havana nearly three years ago. It was one of those lovely warm evenings, around dusk and Alejandro’s band Gala Mayor was the featured entertainment.

They fabulously performed a series of jazz and Latin tunes. Dania, performing vocals, was splendid. We were all crowded onto the turquoise veranda of this old Cuban home trying to make sure we didn’t miss a single note. This was the Cuba I adore – great music, a setting sun and light breezes. They could have played all night.

After the performance, I rushed up to Alejandro and Dania introducing myself. We spoke briefly but with their charm, grace and love as a couple, I knew they were people I wanted to get to know better. And, I did.

During my stay, I interviewed Alejandro about his career as a musician and of course, the African influence in Cuban music.

So, the launch of “Los Afro-Latinos” begins just as I began my last trip to Cuba, in conversation with Alejandro Mayor.

Plus, he’s just a nice guy with a great smile.

Los Afro-Latinos: What are your earliest memories of Cuban music and performing?

Alejandro Mayor: The earliest memories I have of Cuban music are from our family reunions with my grandparents, aunts and cousins. My grandfather and his brother (who played guitar) used to sing boleros, guarachas, rumbas and some Yorubas and Congo melodies until late at night. For me as a kid, that used to be the opportunity to stay awake late. I didn’t want to miss a detail. One of my greatest memories is just to be part of these jams, singing and playing with them some years later and the other was the first time I saw my cousins playing Rumba and Batas in a party. I think it was in that moment that I knew that I’d be a percussionist and musician.

LAL: What is Afro-Cuban music? How would you describe it?

AM: Afro-Cuban music is all the music with African roots, played in most cases with drums, singer and choirs in different ceremonies either religious or not. Yorubas, Bantú and Ararás are the three African ethnic groups with more relevance into Afro-Cuban music and the Abakuás Secret Societies also have an important influence in this field. In my opinion, it’s travel to a place lost in time. I knew from African people that nowadays a lot of the manifestations we keep in Cuba are impossible to find in Africa.

LAL: Besides the drums, which are commonly associated with Africa, what other instruments originated in Africa and are played in Afro-Cuban music?

AM: There are different shakers and rattles, such as maracas, chekeres, bells, sitcks, etc. 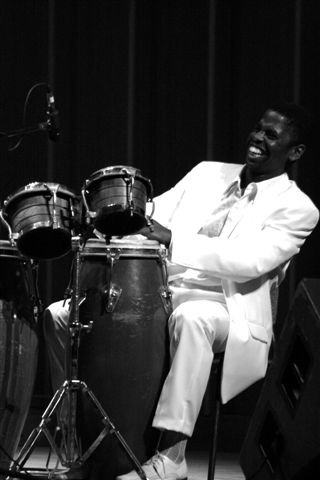 LAL: What would you like people to know about the African influence in Cuban music?

AM: The African influence is what makes the difference in the Cuban music.

LAL: How do you mean?

AM: In Cuban music, it’s simple to find the African influence by hearing the lines of all those different drums (like tumbas, bongos, batas, bocus, etc.), bongo bell, güiro and maracas. Even the drum kit and the timbales were adapted to play with the Cuban formats such as charangas, orquetas tipicas and conjuntos using Afro-Cuban patterns. Also you can find that the other instruments such as piano, violins, bass, brasses, etc. use Afro-Cuban musical material.

In musical formats that have no percussion you feel that in the rhythm of the instruments, in the way to play the notes. They’re the same notes but with a different feeling.

LAL: Have you visited Africa?

AM:No, I never had the opportunity. But if I could, I would like to visit Senegal, Costa de Marfil, Nigeria, Camerún, El Congo and Angola. I’m curious about the lives in those countries and the music there. I’d really like to see the reaction of people at concert of my band, Gala Mayor, there.

LAL: Speaking of Gala Mayor, how would you describe (your wife) Dania’s voice? What does she bring to Gala Mayor as a vocalist?

AM: Dania has a very personal tone and sweet voice. She brings contrast to the hot sound of the band. Every melody I put in her voice, is nice for the ears and the soul.

LAL: What’s it like to be a musician in Cuba, a country with so many marvelous musicians?

AM: It’s a big compromise and responsibility with the meaning of Cuban music, all the names of great musicians, all [their] successful work and with my own ideas and concepts. 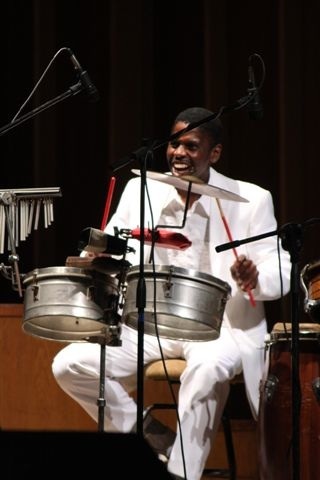 Mayor on the drums. Photo courtesy of Alejandro Mayor.

LAL: What’s hot in Cuban music right now? What are people listening to and enjoying?

AM: Right now the main stream in Cuba like Regaeton, but now really fusion-ed with TIMBA. People here enjoy listening and dancing to Cuban Salsa, Ballads, Regaeton and Funk.

LAL: Which musicians inspire you and why?

LAL: In 2007, you were invited to perform at a Jazz Festival by Chucho Valdés. What was it like to perform with him? What did you learn?

AM: It was an honor for me to have the opportunity to play on the same stage as Chucho Valdés, to have his criticisms and support to make [me] better and see the satisfaction in his face or hear nice words from him about my work.

LAL: How would you describe the sound of your new CD, “La Fusión”?

AM: My roll in the CD was to give my Cuban perspective and groove to Ronald’s compositions as a musical director and arranger. And complete the idea with two of my compositions. At the end you find a balanced and compact sound.

LAL: How did you partner with the German musician?

AM: I was called by the Vice President of International Relations of the Cuban Institute of Music, Alejandro Gumá. He wanted me to organize a workshop for a German Big Band and Ronald Hänsch was the head of that project.

After the workshop he asked Mr. Gumá about the possibility to do something with me and Gumá helped [connect us] here in Havana some months later.

After two sessions of rehearsal, I proposed to make a recording session to see what happens. After that we couldn’t stop until we created this CD “La Fusión” that contains dreams, ideas and emotions of hours of hard work in rehearsals, concerts and recording sessions.

LAL: You mentioned that your role in the CD “La Fusión” was to give your Cuban perspective, how would you describe that view? How is it similar or how does it differ from Ronald’s perspective?

AM: To have the right perspective and understand that people expect to dance with salsa music. It’s important to know how to dance salsa, that’s why I incorporate TUMBAO combinations on piano, bass and percussion to give the feeling of TIMBA or Cha Cha Cha (Cuban dance music) to some of Ronald’s compositions, such as “La Fusión” and “After The Gig”; the same I do in my arrangements for my band to play salsa music for dance concerts. I also had to adapt the structure of these compositions, but always respecting the original melodies and harmonies.

AM: I have dreamed to see the success of my son as a gymnast. Mi meta como músico es recuperar todo este tiempo que he dedicado a mi hijo y a mis músicos para consolidar una banda con un sonido fuerte y contagioso. [My goal as a musician is to recoup during all this time that I dedicate to my son. And for my musicians to knit together as band to make a strong, infectious sound.]

“La Fusión” was released in Berlin in October 2011.