Cuba Comes to San Diego at the WorldBeat Cultural Center

When you walk into the WorldBeat Cultural Center (WBCC) in San Diego, California, there is a feeling of community. High in the ceiling are flags from around the world, wall-to-wall paintings, pictures of familiar performers, graphic artwork, African masks, a ten-foot tall metallic statue of kids playing, and an art gallery.  In addition to all the visual stimulation, you will always hear music. It is truly a cultural oasis with people from all ethnic backgrounds dancing to the beat of the same drum. Prior to attending Noche Cubana on March 25, I had the opportunity to meet with performers Juan Carlos Blanco, Angelica Cardona, and to my great surprise El Cubanísimo Edy, from Havana, Cuba, arrived in town early.

Juan, a Cuba native, now lives in San Diego. He is an Afro-Cuban dance teacher, percussionist, and performer. Angelica was a student of Juan’s at UCLA and now they have an Afro-Cuban infused hip-hop group called In-Flow. El Cubanísimo Edy is a professional dancer and singer, from Cuba. 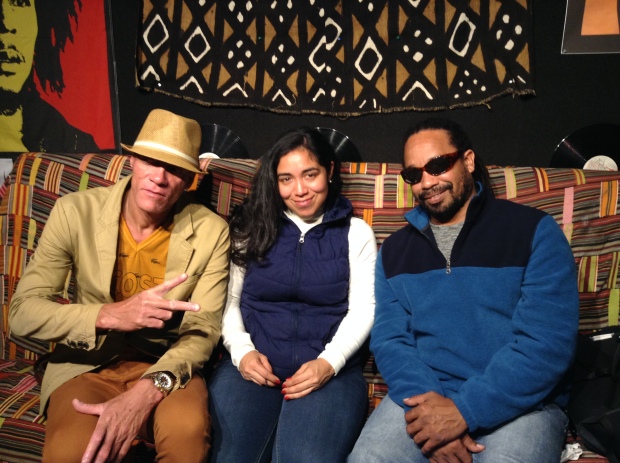 As I approached the dance floor at Noche Cubana, a five-year old, dressed in a white button down dress shirt, dress slacks, dress shoes, and a grey Fedora hat, stole my attention as he danced with his friends to Cuban rhythms. Not far from him, a young boy, who could barely walk, held on to his sippy cup with one hand and pulled his mother on the dance floor with the other hand and began to teeter back and forth. He smiled, giggled, and danced to the music.

Are you ready for Noche Cubana?

Juan:   There’s a lot to get ready for this show each and every time because we do something different at each show. We make it new again with new performers and new music. This is Edy’s first time performing at Noche Cubana and his first time in the United States. I rap and she (Angelica) sings.

Angelica gave me some background on how the duo came to be.

Angelica: I came from a gospel background singing in church. The music I grew up listening to was very much the African-American style of singing. It encapsulated everything I felt musically, everything that resonated with me. After I met Juan and he heard me sing in church, he asked me if I wanted to sing in the band. I said, I don’t sign in Spanish. He told me if you can speak in Spanish you can sing in Spanish. However, to me singing in another language was another feeling and I didn’t feel that I had that. Juan believed I could do it and he kept handing me music. Before long I was singing it naturally, then studying it more. I stepped out and tried it. Organically, in return, I thought Juan could rap. When he would speak, I could hear a certain timbre in his voice that would be great for rapping. So I gave him some artists to listen to. We pushed each other artistically. I also respect him because he’s my teacher too. The group In-Flow grew from us encouraging each other to try something new.

Edy, how does it feel to be in the United States for the first time?

Juan’s translation of Edy: It feels like a dream to be here. When I was a child I loved the music, the Dominican music that comes from the black influence from America. It is a dream come true.

Juan came to the United States over twenty years ago. He says he couldn’t find a place to call home where he could hear the music and dance. He started teaching at the WordBeat Center in 1998. He offered Rumba classes every Sunday as a method of bringing Cuban people and San Diego people together.

Do you think your goal of bring people together is working?

How many people are lined up to perform at Noche Cubana?

Juan: We have a drum class that meets every Sunday at the WBC. The drum class is going to perform. They have a piece they’re going to show. We also have a Cuban Salsa Class. We do that with everyone that comes. So we’ll have everyone dance. We’ll have two parts. First half will have drum performance and lots of popular music, Soul and Timba, etc. The second half will be all performance, with In-Flow, a Latin dance group (Divas Dance Company) that performs around the city, and El Cubanísimo Edy.

Angelica: Juan told me I could play drums. I never thought I could drum. It happened naturally. I was moving to the drum as a dancer and I said, “Ah I get it. Let me touch that. Let me play that.” Then it’s started to feel really good and I said, “I like this. I can do this some more.”

What will people walk away with after Noche Cubana?

Juan: They will learn a little bit about my country. They’re going to understand a little bit more about us. People from the United States have many ideas about Cuban people but most of the ideas are wrong. They don’t know us. They’ve been talking about us for 15-20 years and they don’t really know who we are as a people. Part of my goal is for Noche Cubana to show the people who we are. We also have a program every year where we take people to Cuba to learn more about the culture, music, and dance. They learn about Cubans. We participate in one of the big folklore festival, Wemilére (Festival de Raices Africanas). We live with people 24-hours a day and we go to (Afro Cuban) ceremonies.

Edy, how long have you been performing?

How has your performing changed over the years? How has it grown?

Edy: Now I sing and I rap.  I do a mixture of salsa, Cha Cha, Merengue. I was known for dancing in Cuba.  I’ve been working  hard at what I do.  I started to find all these things I could do. I didn’t even think about it before. It was a natural outgrowth. I discovered I had the ability to do more than the same genre.

Juan: As I said, I started off as a dancer, that was my thing. I said, I’m going to be dancing all my life. But then, very quickly, I started playing drums. Then I started teaching, choreographing, and now I also do theater. You never know you’re going to do that much until you get here. Then you say, I wanna to do that too or I can try to do that.

How can we shed light on the Afro-Latino and Afro-Cuban culture?

Juan:  I would say there is not enough information. Knowledge is information. When you don’t have the knowledge you don’t really know what you’re seeing. We need to give more information about who we are. These two ladies in my class mentioned that they come to my because their ancestors were from Nigeria. The tradition was the Yoruba tradition. Their family doesn’t practice anymore. These two girls tell me the come because they want to learn their religion because they don’t have access to it anymore. It made me feel proud that they come to me. The same thing happens with other students. They will say, you made me remember this or that. This guy from Curaçao, said he heard me say a familiar word. He heard me say “Awe (au – way).”

-He says, “Hey, we say that word in my country, what does that mean to you?”

I told him that “Awe” means “Today” in the Congo language.

-He says, “Yeah, that means the same in my language. I never knew there was a Congo language.”

So people can learn information here. We talk about the time before all the Colonial people brought Africans to America. We talk about what the religion was like before and how things were different. A different history. Many of our stories didn’t make it to America. They took the stories out of our history in America but in Cuba we save that information for over 500 years. Nobody can take this from us, Never.

You teach classes, at what ages can students start it?

Juan: We teach elementary students. Angelica met me in undergrad classes. We teach adults too. If you can walk and talk, you can learn.

I read something about food being available at Noche Cubana. What is on the menu?

Juan: Authentic Cuban Food! Azzoz Moro, which is rice with beans cooked together. We will have Yucca, which is like a potato, and Cuban chicken. Not everyone knows how to cook it but it will be authentic on Saturday.

At Noche Cubana, the food line wrapped around to the dance floor as the senses were tempted with the seasoned Cuban spices.

How do you keep a part of Cuba with you?

Juan: To keep a piece of Cuba with you, we need to be together. It’s the only way. (Angelica chimes in with, “Seek Community. “) It’s the only way. I can’t reach every Cuban in San Diego because it’s too big but we will try with WorldBeat Cultural Center and annual events like Noche Cubana. That’s why I started at WBCC.  It’s grown since I started in 1998. In the beginning, we would go to someone’s house, play, sing, and dance. Then on Mother’s Day we go Mission Bay, Father’s Day we do the same thing, play music, sing, dance, and bar-b-cue. Now Noche Cuba is here. It’s a good start.

There is no doubt that Noche Cubana was a cultural awakening, as a young lady celebrated her 18th birthday by singing a song on stage, her friends filled the room and the DJ’s mix of music kept people dancing all night.  There were people, young and seasoned, from many different ethnic backgrounds dancing to Cuban rhythms.  The electric sounds of El Cubanísimo Edy and In-Flow, along the Divas Dance Company topped off the evening as the audience danced from wall-to-wall, making it hard to leave the building.

The next Noche Cubana will be this Saturday, June 10, WorldBeat Center in San Diego, California.  For more information visit http://events.worldbeatcenter.org/?event=noche-cubana-8.

From: Uncategorized
← A Columbian Adventure
Military Police Theater Group of Bahia →
No comments yet