If you’re ever wandering down Manhattan’s East 56th Street you may have noticed a little sign that reads “Tutuma Social Club.”

Blink and you’ll miss it. But tap down the staircase to what appears to be nothing more than a basement and you’ll be greeted with incredible Jazz music. It’s the Gabriel Alegría Afro-Peruvian Sextet playing jazz music, which transitions smoothly between sweltering and upbeat to slow, calming and intimate.

The club itself is tiny. Tables are squeezed together making strangers fast friends. And it’s dark save for the candlelight and occasional house lights to signal the time between sets. All you can hear during the sets is the music: loud, fluid, playful. This is not a conversation spot; this is an experience. An Afro-Peruvian experience.

So after tasting some of the delicious Tutuma menu (The Queen Avocado is highly recommended!) Los Afro-Latinos sat down with Santina Matwey, who opened Tutuma Social Club in May 2009, and Gabriel Alegría to talk about the unique qualities of Afro-Peruvian music, food and culture.

Los Afro-Latinos: Tutuma all started because you went on a trip to Peru?

Santina Matwey: The Gabriel Alegría Afro-Peruvian Sextet takes their fans to Peru every year. And you get to see Peñas [music clubs that offer folkloric music shows] where they continue the tradition of Afro-Peruvian music. And everybody sits together — very similar to Tutuma –everybody’s eating and drinking and having a good time. And the music is a big part of that. You can’t have one without the other, so there’s all these factors together. So when I went, I wanted to open my own place. [I thought] that would be a really great thing to try. It would be unique in New York and it’s just really important to keep that [Afro-Peruvian] culture alive.

LA-L: What did you think is distinct and unique about Afro-Peruvian culture? Is it the food? Is it the jazz?

SM: Afro-Peruvian music and culture are unique in the rhythms they use, the instruments they use – you don’t really find those or see those in other places. [The culture] is also unique in that people are really friendly and warm to one another. Sometimes, jazz can seem a little bit unattainable, but with Afro-Peruvian music, the audience participation is really key to it. The clapping, the dancing and singing along.

LA-L: What gives Afro-Peruvian jazz such a unique sound? 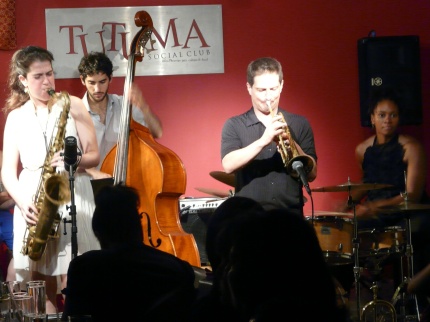 [*Peruvian food is a combination of many cuisines, it’s fusions. The fusion of Japanese food, for example. And Afro-Peruvian Jazz is a fusion of American music and Peruvian music. And there’s a connection, but it’s not in the rhythms or in techniques. The connection is spiritual. It’s complicated because it’s in how you feel. But not necessarily something you can describe with technical terms.

There’s a connection between the music and all the old Jazz played in the 20s and 30s. And the spirit of the Peruvian music is there. But modern Jazz has another spirit. It’s more intellectual. While old Jazz has more of a connection with Afro-Peruvian Jazz because it’s about the public’s participation. Energy, audience participation are more important to us. The people, not just thinking, but feeling.]

LA-L: And what about the food?

SM: Peruvian food is some of the most unique in the world. You have an Asian influence, Italian influence, French influence, and because of the current that runs along Peru – it’s the Humboldt Current – there’s a lot of fish that you don’t see in other parts of the world. It’s also very rich in marine life. There’s lots of great seafood. There’s also lots of peppers that don’t grow in places other than Peru. We use Aji Amarillo and ricoto. Those are just a couple of the peppers that we use in our traditional cooking. There’s also four hundred varieties of potatoes and corn that grow in certain parts of Peru. Potatoes that grow in the highland can’t grow in the valley and so and so forth. It’s just really amazing how with all the different climates that are Peru you get so much from just one country.

The Queen Avocado from Tutuma’s menu.

LA-L: What’s your favorite meal on the menu?

SM: It depends on my particular mood. The anticuchos are delicious. They’re made with pieces of filet mignon with huacatay mash potatoes. Huacatay is an herb that grows in the Andes. They mix that in the potato and it’s really yummy. My favorite part of that is the Aji Amarillo pickled. It’s the pickled piece of the this pepper. And the other one is the Aji de Gallina. That’s a full chicken dish with a creamy sauce. It also has Aji Amarillo in it and it’s served with rice and potatoes. It’s a really comforting dish.

LA-L: When you say Afro-Peruvian, many people are unaware that Peru’s culture has been influenced by Africa. Can you speak to that a little bit?

SM: The Spanish brought slaves from Africa to Peru, as they did to many parts of the world. And that culture stayed in Peru and grew. There is quite a large black population. A lot of people don’t realize that. They think indigenous people are just people descended from the Incas. But that’s just one small part of it. You have people that look like that, then there are people who are black and then there are people who look white because they’re descendants from the Spanish. Then you have people who are mixed. It’s kind of crazy. There’s also Asian people in Peru as well. It’s a mix. When you see and you go there you can’t believe all these people are Peruvian. They’re all speaking Spanish. It’s very cool that way!

LA-L: So Tutuma fits perfectly in New York because New York has such a mix of people?

SM: Yeah. Our clientele is not mostly Peruvian at all. That’s a small part of who comes here. Really it’s people who enjoy music. They love culture, they like to travel and do new things. And most people when they come they absolutely love it. They can’t believe all these things exist in one country.

LA-L: Why did you name the club Tutuma?

SM: Tutuma is actually a fruit that grows in Chincha [a town 200 kilometers south of Lima]. That’s where they say all Afro-Peruvian music was born. When I went the first time, they take this fruit that looks like a hairless coconut. They crack it open and there really isn’t any fruit inside. They let it dry and then let it soak with fig wine and secret ingredients and then that sits for about three months. It makes this moonshine, which is absolutely delicious. When I went the first time they gave me some. And the back of our bus was called the “Tutuma Social Club.” [Laughs] Only people having Tutuma and having a good time could be back there. So when we needed the name for this place, it was the only logical thing. 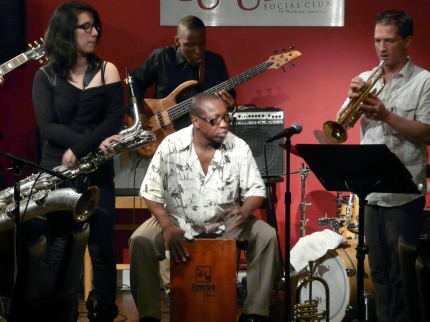 LA-L: You just talked about going to Chincha. Can you talk about your trip to Chincha and give a little description?

SM: [In Peru] there are black people – and that’s how they refer to themselves – but there’s a large black population in Chincha. There’s also a very famous [Afro-Peruvian] family, the D’Ambrosio family, and they have a long musical history. The first time and every time that we’ve gone [down for the tour] the band does a whole performance outside. So the sextet and all these other bands play variations on Afro-Peruvian music. It’s very cool. When we went that first time, they set up a stage for the sextet and everybody on the tour was able to go into the [D’Ambrosio] house. They made food for everyone and you see all these great musicians – it was just mind-blowing. They’re not blinged out – they’re just simple people. They’re so willing to share their culture with everyone because they’re so warm. You don’t have to be Peruvian and you don’t have to be black to experience it.

LA-L: What are your future plans?

SM: We want to expand Tutuma. We always like to incorporate some of the Peruvian culture in what we do, that’s why we do Afro-Peruvian dance classes and music lessons and all those things. So that’s something that we’re going to expand on. And for the future we definitely want to open a place in Lima so that we can have a Tutuma Lima and a Tutuma New York. We can share musicians. Musicians from the States can go to Peru and musicians from Peru can come to the States. It will be a really a cool project, so I’m looking forward to all that.

And for more information about The Gabriel Alegria Afro-Peruvian Sextet visit their website: http://gabrielalegria.com/eng/